Real Madrid have all but secured their place in the Champions League last-16 after a dominant 6-0 win over Turkish giants Galatasaray at the Santiago Bernabeu. Rodrgyo’s early double and a Sergio Ramos penalty saw Los Blancos race into a three-goal advantage after the first 15 minutes, allowing them to control the game with ease.

Rodrygo broke the deadlock after just four minutes, leaving Mario Lemina sliding across the turf in his wake before drilling a low effort into the bottom corner with aplomb after Marcelo’s cross-field pass.

Just two minutes later, he doubled Madrid’s early lead after good work between Toni Kroos and Marcelo saw the Brazilian earn his second assist in as many minutes, floating a teasing cross towards the six-yard box, where his compatriot made no mistake to head into the far corner. Galatasaray goalkeeper Fernando Muslera had no chance.

VAR was called into action and after the referee reviewed camera replays on the pitchside monitor, awarded a Madrid penalty after 13 minutes. Steven N’Zonzi’s needless foul on Kroos was eventually punished, though initially play was allowed to continue before the decision had been correctly overturned. Captain Sergio Ramos made no mistake from twelve yards with a Panenka to further extend Real’s commanding lead.

Casemiro had a goal disallowed for offside as Real hunted more goals, but were given a gift on the stroke of half-time. Yuto Nagatomo’s slack attempted pass for Marcao was cut out by an alert Rodrygo, who fired across the area to present an easy tap-in for Karim Benzema.

If not for Muslera’s point-blank save to deny Eden Hazard in stoppage-time, Galatasaray would have been 5-0 down before the interval. Despite both sides making changes, Real’s lead remained intact and the visitors had Muslera and some lax decision-making to thank for that, as the hosts understandably took their foot off the proverbial pedal.

Benzema completed his brace with another straightforward finish after work from Luka Modric and Daniel Carvajal, whose drilled pass was converted from close-range.

Then with the game’s final kick, Benzema turned creator after combining with Rodrygo on the edge of the box before releasing a clever through ball for the teenager to slot home. Without further ado, here are five talking points from a memorable Real victory:

#5 Despite looking good on paper, Galatasaray frustrate yet againIt was another forgettable night for Galatasaray, who now sit bottom of Group A after four games 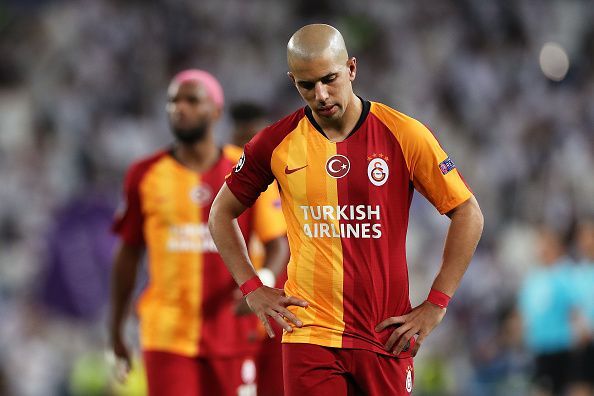 Stats can be deceiving. Ahead of this fixture, Galatasaray had conceded two goals in their three previous group games and plenty was said about how their dogged backline could prove a stumbling block for Los Blancos. Those comments were made redundant within the first 15 minutes. They’ve now conceded eight in four matches and sit bottom of Group A.

They are a Europa League team with inflated Champions League status, having enjoyed previous success in the competition many years ago. They haven’t progressed past the group stages since 2012-13 and 13-14, where they also had difficult group stage opponents but better cohesion as a collective unit.

Selçuk İnan in his prime, a tenacious Felipe Melo, Wesley Sneijder’s creative brilliance and goals from Burak Yilmaz and Didier Drogba. Now, their three best players are all on season-long loan deals in Turkey: Steven N’Zonzi (Roma), Jean-Michael Seri (Fulham) and Mario Lemina (Southampton), while the future isn’t exactly regarding their youth prospects either.

Unsurprisingly, the midfield trio struggled to contain Real’s multiple threats and while N’Zonzi is traditionally viewed as the defensive protector, his influence was made insignificant early on after conceding the spot-kick after fouling Kroos – receiving a booking too.

Lemina was busy and tried, but made to look silly a few times in the build-up to Real’s first-half goals. Seri won duels and buzzed about, though couldn’t contend with Federico Valverde’s incessant pressing and the subtle brilliance of Kroos. Speaking of

#4 Toni Kroos oozes his class, leading by example in midfield

Just like usual, this was another commendable midfield display by Toni Kroos – who has personally enjoyed a good start to the 19-20 campaign. The 29-year-old German international leads by example there and while Luka Modric’s decline is evident for all to see, his younger counterpart continues to orchestrate attacks and create chances with seeming ease from deep-lying roles.

Over the 90 minutes, only Carvajal (119) had more than Kroos’ 113 touches and the midfield metronome didn’t shy away from his defensive duties either in a match that could have proved difficult, if not for Real’s rapid start to proceedings.

Although not officially credited with an assist for any goals tonight, he played a significant part in their first three: releasing Marcelo with an inch-perfect pass, from which the Brazilian fed Rodrygo. For their second, he remained composed and aware to receive the ball on the turn inside the area, leaving N’Zonzi in his wake before quickly scanning options for a pass.

Again, Marcelo was there to receive and teed up his compatriot. Casemiro or Valverde for example, probably would have passed backwards or sideways, their attack snuffed out and the opportunity gone. After a lengthy delay, he also won the penalty Ramos converted having baited N’Zonzi into a needless challenge and enjoyed another subtly brilliant display: 91% pass success, five duels won, two key passes and tackles completed.